March was a big month for the Luvva stream; a BIG month indeed. March saw the biggest leap forward in viewership (still admittedly tiny) I’ve had since my return; it also marked my biggest concurrent viewership as well as my longest streaming time. It was very successful, and it got me Affiliate status on the 14th!! HUGE!On top of being made affiliate I also got my first sub ever, MunkayMagic, who made his big return to my chat! I finished the month with 6 subs, and whilst this is a small number, it is amazing that I have 6 people who want to support my stream financially! It really is humbling, I mean; I am just a guy playing games, for a small audience.

I spent most of the month playing ‘The Evil Within’ and its DLC chapters and it was a great time; my viewers and I were trying to piece together the strands of the story in a vain attempt to make it comprehensible, we failed. Completely. The game’s story may have made little to no sense, but the game itself was very enjoyable and a joy to stream; it was difficult in places for sure, but it was good fun to play and our constant guessing about the story as well as narrative reviews were good craic. For all its flaws, I ended up really enjoying ‘The Evil Within’ and so did my audience; the chat was full of craic and speculation and everyone seemed to really enjoy the game!

After we’d spent three weeks playing through the game I decided that we needed a break from all the horror (and my dying almost constantly) and on the 28th Sony dropped the VR update to WipEout and thus, we had our first ever VR stream. WipEout VR is absolutely brilliant; it is a real technical marvel, the visuals are clear, vibrant and beautiful, the game moves at an unbelievable pace and there really are no compromises here by the team who converted it. Best of all however is the fact I experienced no motion sickness whatsoever with WipEout VR – we have a game that involves high speed, massive climbs and even bigger vertical drops as well as jumps and there was not even a jolt in my stomach. It’s as impressive as it sounds unlikely. WipEout VR is a must play (I would say buy, but it’s completely free) for anyone who has the PSVR. 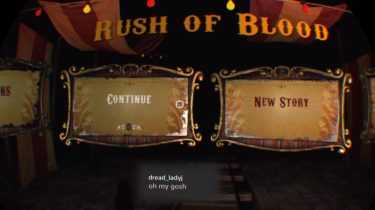 The VR stream became my most successful of the month; I doubled my average viewing figures and had a few new names participate in chat – it was certainly an event stream and it was brilliant craic and strange to get used to. It is however extremely limited due to the nature of the technology; using my Elgato HD60S was out of the question, not for any technical reason but, because I would have been unable to read chat and interact with my audience (which is literally the point of my stream) so I streamed it using the inbuilt PlayStation app and it worked magnificently! Chat appears on the headset in a bubble and disappear, so it does not break immersion for the player and the delay is no worse than it would be naturally so that is obviously another bonus.

However, it is not perfect, there is a character limit to what can be displayed (as there always has been for some reason so if any viewer has a detailed question to ask they must break it into different messages for the streamer to read it all and in the heat of gaming it is extremely easy to miss a message (even if it is right in front of your eyes). It’s a bit of pain in VR especially because you’re unable to read the full thing on your iPad for obvious reasons.

March was incredible for my channel and now that I’ve been affiliated (something that I wasn’t working towards to be honest), it allows me to put in a few flourishes to make the viewing experience even better for my audience…

…that will be discussed next month though.

Do you stream? Tell me about in the comments!

Why not hit me up with a follow on twitch and join the craic in chat?