While that post is pretty darn conclusive – it wasn’t science and it certainly doesn’t mean that jumpscares do not have their place in gaming. I’d be a big fat liar if I said that I’ve never been gotten by a jumpscare (or five).

So here are my personal favourite jump scares that made me squeal like a little girl. 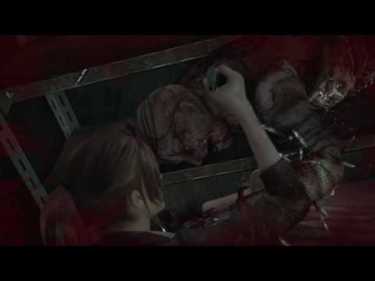 The most recent jumpscare on my list! I started playing this game on Monday night and to be honest – this jumpscare made me literally scream and jump out of my seat! I would love to say it’s been a while since that happened – but it was about a week (see the next entry on this list).

Basically,the jump scare is classic ‘Resident Evil’, you are investigating a mysterious blood trail and you hear a woman screaming from just in front of you (and always out of sight) so you are expecting something to happen. Only it doesn’t happen when you expect it to…

That’s when the game gets you! And it got me well and truly! I nearly had a heart attack! I had to pause the game and compose myself; and when I say I paused the game, I fumbled around for the pause button in a sheer adrenaline fueled panic!

As I said in this post, ‘Until Dawn: Rush of Blood’ is actually a pretty scary game! It certainly unsettled me before the title card appeared for goodness sake!

This was another exquisitely put together jump scare as well! The game begins with you sitting on a ghost train car and as you move (slowly) towards the beginning of the game you heat some girl singing a truly scary song. The 3D audio of VR kicks in and you hear this song move with the ghostly apparition, you instinctively move your eyes towards the source of the sound , then it throws the jump scare at you…

…right in your face there are three ghostly (maybe zombie) ladies right at your cart! It scared the hell out of me! 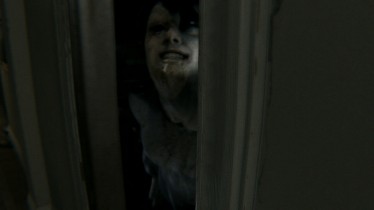 Let’s face it, PT was a terrifying experience and an excellent proof of concept for a truly cerebral horror game.

It also threw supremely good jump scares at the player! None got me as much as Lisa appearing through the slightly ajar bathroom door though!

Why I hear you ask; well up until that point the game had done nothing except create the foreboding atmosphere the lighting was brilliant, that creepy radio transmission was clearly audible, the music was masterfully composed and with the stunning FOX engine I was terrified!

When she appeared in that little gap – JESUS!

An oldie, but by God it’s a goodie!

Another great jump scare from Konami!

And again this is a triumph of atmosphere, scene setting and misdirection!

You enter a locker room and you hear a locker door being pushed from the inside, so you investigate the sound and you discover a locker with the door moving – being the helpful sort Harry opens the door and despite blood being everywhere there is nothing there. Strange! You turn to leave…

…and it is here that the scare occurs! A corpse falls out from another locker and you leave the contents of your bowels on your seat!

It plunges the player into a forest, late at night, armed with only a torch. The player is then tasked with picking up 8 pieces of paper that give us little snippets into what is hunting us.

What is hunting us is a truly creepy supernatural creature wearing a suit and sporting a featureless face. The first time you see him you will jump, but the closer you get to finding the 8 pieces the more regular his appearances will become as well as the closeness of these encounters. While it uses the same jump scare all the time, the decreasing proximity and increasing regularity ensure that you never really desensitise.

Every appearance brings with it a solid jump and a little bit of a squeal!

What jump scares have gotten you?

Tell me in the comments below!

3 thoughts on “Frightfest 2016: Jump Scares that scared the hell out of me!”