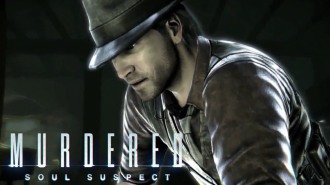 The window smashes as you are thrown through it.

Looking up, you see your assailant. Hooded and masked. You fire a few shots from your government grade pistol, hoping for a lucky shot as your body hurtles towards the ground.

With a crunch you land. You’re not dead, seriously hurt yes, but not dead. Your assailant walks to your side, picks up your gun and puts 5 bullets into your body.

You feel the icy grip of death on your shoulder.

This is the first few minutes of ‘Murdered: Soul Suspect’ and it sets the narrative in motion instantly. You are dead. There is no respawn here, you will remain a ghost, with no clues and no earthly body you go on a quest to find your killer so you can pass on to the afterlife.

The question remains though, is ‘Murdered: Soul Suspect’ dead good? Or just dead on arrival?

The opening to ‘Murdered’ packs a real punch and does a stellar job at gripping you, while simultaneously investing you in its protagonist, Ronan O’Connor (or generic Irish Name guy). The main story continues to impress throughout the games 8-10 hour run time and keeps you guessing right to the end – on several occasions I was convinced that I had sussed the murder case out and was wrong on all but the last occasion. A game narrative that has you shouting “OF COURSE” at the end has done its job well and has resonated in the player. Well done Alright Games.

There are also several side stories that are excellently executed, these take the form of level specific collectibles that will unlock a 4-5 minute noir-esque cut scene made up of still photos with a voice over. They are all ghost stories and add a level of legitimacy to the central premise, Ronan is not the only ghost in Salem, this is a phenomenon that has been occurring for centuries! It is here that the excellent voice acting is made apparent.

The game does a fine job at bringing life to its characters; Jason Brooks is a fine Ronan and Cassidy Lehrman does a sterling job with Joy. The support cast is just as strong – but there is an issue with the voice acting outweighing the actual characters – there is very little; effective, character development! We have scenes when we learn a little about them, but they are seldom very well done, the side quests and references to Ronan’s life with his wife falls flat and the issues with Joy and her mother are cliched and contrived – it’s as if they lost interest with their lore beyond the main story and ghost stories.

The game mechanics; while fun and somewhat unique, are also incredibly limited – we have three distinct phases that the game will rotate;

Although it sounds like I hated this game, I genuinely had fun with it. It’s more than the sum of its parts and it is fun, it’s frustrating when you’re playing a game that starts so strongly and never gets any better. What we have here is a genuine lack of ambition, or a lack of funding.

It never lives up to the promise of that opening scene, it never gets close.

And it is a disappointment, I had high hopes for this game and it never lived up. Yes its fun, yes it is worth a go, yes it had a good narrative – yes it’s a missed opportunity.